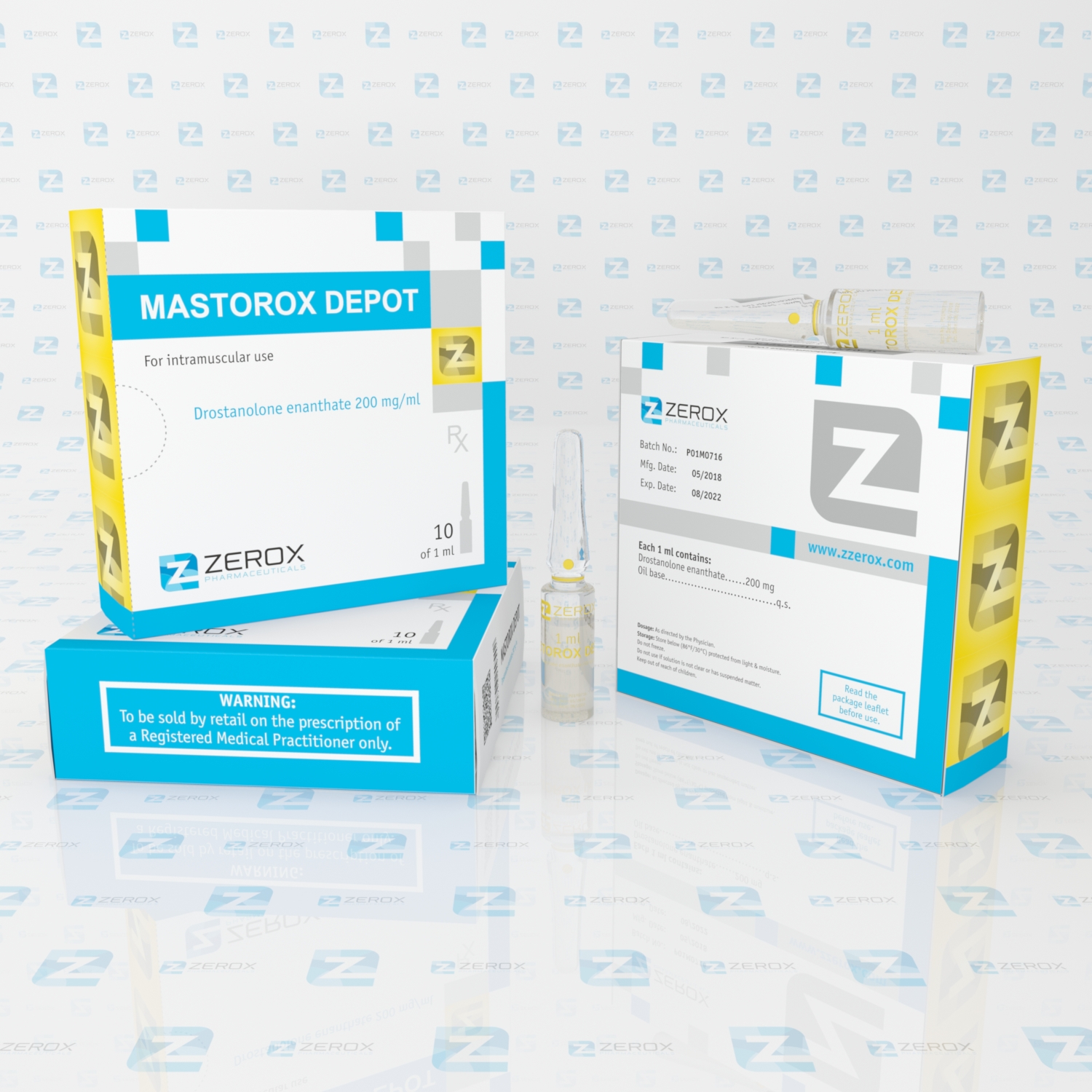 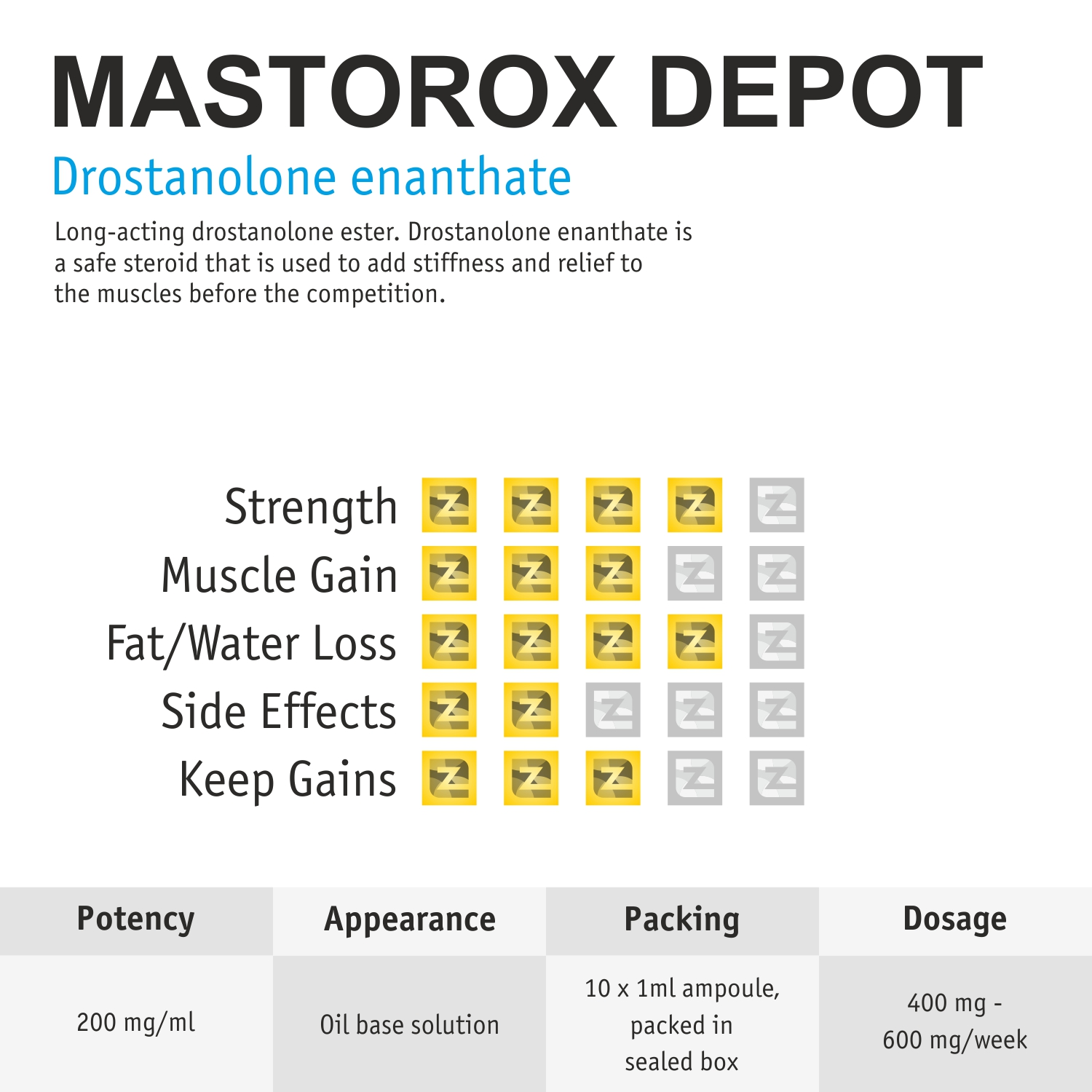 What Is Masteron Enanthate and Why Is It So Popular?

Which brings us to the next important property of Masteron: it has demonstrated capabilities of as a moderate aromatase inhibitor, as well as possibly acting to block Estrogen at receptor sites on breast tissue[2] [3].  This does make perfect sense when we see how the Propionate variant of Masteron was utilized exclusively within medicine to treat Estrogen-dependent breast cancer in females. Through its activity as an aromatase inhibitor, it can indeed cause a reduction in water through anti-estrogenic action. This is indeed the reason as to why at very low bodyfat percentages, bodybuilders experience a ‘chiseling’ and 3D ‘ripped’ look to the physique that is almost unique with Masteron. Finally, in addition to the chemical modifications, Masteron Enanthate has been affixed with the Enanthate ester on its 17-beta hydroxyl group, which serves to extend the half-life of the drug to about 7 – 10 days in the body. This is in contrast with Masteron Propionate, which is affixed with the Propionate ester and extends its half-life to that of a shorter duration: 4.5 days.

The reason as to why DHT-derivatives are so popular and useful in the world of bodybuilding and athletics is due to the fact that they are incapable of conversion (aromatization) into Estrogen. DHT is not recognized as a proper substrate for the aromatase enzyme in the body, and therefore any hormone that is derived from DHT will assume these same qualities. The only strange exception to this rule would be Anadrol-50 (Oxymetholone), which expresses heavy estrogenic effects, but still does not actually aromatize. On the other hand, no estrogenic effects what so ever should be experienced with the use of Masteron Enanthate at any dosage used at all. The same goes for any other compounds that are in the DHT-derivative family (with the exception of Anadrol, of course).

How Does Masteron Enanthate Work and How Is It Best Used?

Masteron Enanthate is a long estered (and therefore, long acting) variant of Masteron, and is therefore best utilized in the context of longer cycle lengths (upwards of 10 – 12 weeks or longer). It is best used in cutting cycles, and even better for pre-contest cycles for competitive bodybuilders. Those who are looking for any significant strength gains or to bulk up on Masteron Enanthate will be greatly disappointed, as this is one anabolic steroid that is not deemed as very impressive in the area of anabolic strength, and in some cases might be weaker in strength than Testosterone. Masteron’s anabolic rating is that of 63 – 130. Testosterone’s anabolic rating by comparison is 100. We can see here that Masteron is at worst, about 30% weaker than Testosterone’s anabolic capabilities, and at best it is 30% stronger than Testosterone in this regard (where receptor binding affinity is concerned). So, while one could definitely experience satisfying results from Masteron Enanthate, it would by no means elicit an impressive or anywhere near dramatic response in an individual. Furthermore, Masteron Enanthate is best utilized in conjunction with other anabolic steroids.It’s solitary use alone might yield disappointment for the user, especially if the individual is not a bare beginner or first-time anabolic steroid user.

Masteron Enanthate dosage requirements do not need to be that high, but it is recommended to begin (and normally maintain) around 400mg weekly. Ultimately, it is dependent almost completely on what the individual wishes to gain from the cycle and the compound itself. Beginner Masteron Enanthate dosage normally begins at the aforementioned 400mg/week zone, though many bodybuilders who utilize it only for its anti-estrogenic or pre-contest effects could easily utilize 200mg/week on top of other compounds. If the individual’s bodyfat percentage is low enough in this case, there should be significant aesthetic benefits to the physique even in the dosage range of 200mg/week. Intermediate and advanced Masteron Enanthate doses as high as 600mg/week or higher (800mg/week or more) can be used, but are almost entirely unnecessary. Those who wish to gain significant amounts of strength and size from Masteron Enanthate would have to venture that high, but considering the expensive nature of this compound and its capabilities, it would be a waste to use Masteron Enanthate for a purpose such as mass and strength gaining. Furthermore, the capabilities of Masteron is understood by nearly all bodybuilders to be an aesthetic enhancement one – not a significant performance enhancement one, and certainly not a significant size and strength gaining one either.

Stacking other anabolic steroids with Masteron Enanthate normally entail the use of other similar compounds, often tailored and geared towards the same goals and purposes. As a general rule of course, Testosterone should be utilized alongside any anabolic steroid. Naturally, the best choice to be utilized with Masteron Enanthate would be Testosterone Enanthate for obvious reasons. For those unaware of why, the combination of two Enanthate-based anabolic steroids merely make administration and timing of injections far more convenient and much easier. Following this, if any individuals wish to throw a third compound into the stack, there are some great choices to be made. A third compound could be an oral anabolic steroid, such as Winstrol or Anavar – both well suited towards the same type of goals that Masteron is as well. Alternatively, the use of a third injectable might be preferential for those especially serious or competitive. The best and most effective choice to run alongside Testosterone Enanthate and Masteron Enanthate would be Trenbolone Enanthate. This ‘Enanthate trio’ of Testosterone/Drostanolone/Trenbolone is regarded by many as the pinnacle cycle of competitive bodybuilders and pre-contest cycles. Obviously, all Enanthate variants are selected due to their great compatibility, and the intense anabolic effects of Trenbolone contribute exquisitely to the aesthetic enhancing effects of Masteron on the physique. Furthermore, neither Trenbolone nor Masteron aromatize into Estrogen at any dosage used. This, alongside the physique altering effects of Trenbolone and Masteron, allow the individual to effectively transform their physique within record time and beyond anything that can be imagined, which is why it is commonly utilized as a pre-contest cycle.

Masteron Enanthate is very rarely used in bulking or strength cycle stacks, and if done so, is normally used for its anti-estrogenic aromatase inhibiting properties. Even with such advantageous properties, many would conclude that such a use for Masteron is a waste of money, as much stronger anti-aromatase capability can be obtained for much cheaper by purchasing and using any of the commonly used aromatase inhibitor ancillary drugs.

Being an anabolic steroid, Masteron Enanthate will suppress and possibly shut down the HPTA (Hypothalamic Pituitary Testicular Axis) through the negative feedback loop. This results in diminished or completely halted endogenous natural Testosterone production in the individual, and can persist even after the cycle is halted. If left untreated, it can leave the individual with a condition known as hypogonadism, whereby Testosterone production is impaired indefinitely. Performing a proper PCT program can increase the chances that this does not develop and that upon cessation of the cycle, the HPTA returns to normal functioning once again.

Negative cardiovascular issues are indeed a part of Masteron Enanthate side effects, and might be an even greater concern with Masteron Enanthate considering its anti-estrogenic properties. In particular, this impacts the levels of HDL (good) and LDL (bad) cholesterol, favoring a higher level of LDL compared to HDL cholesterol, which increases the risk for developing cardiovascular disease. Unfortunately, the reduction of Estrogen levels have also been found to impact the reduction of HDL and increase of LDL even more, and so users should be careful when utilizing Masteron so as to ensure their Estrogen levels are not reduced too significantly so as to result in greatly altered HDL:LDL ratios. Supplementation with proper cardiovascular support is highly recommended as well.