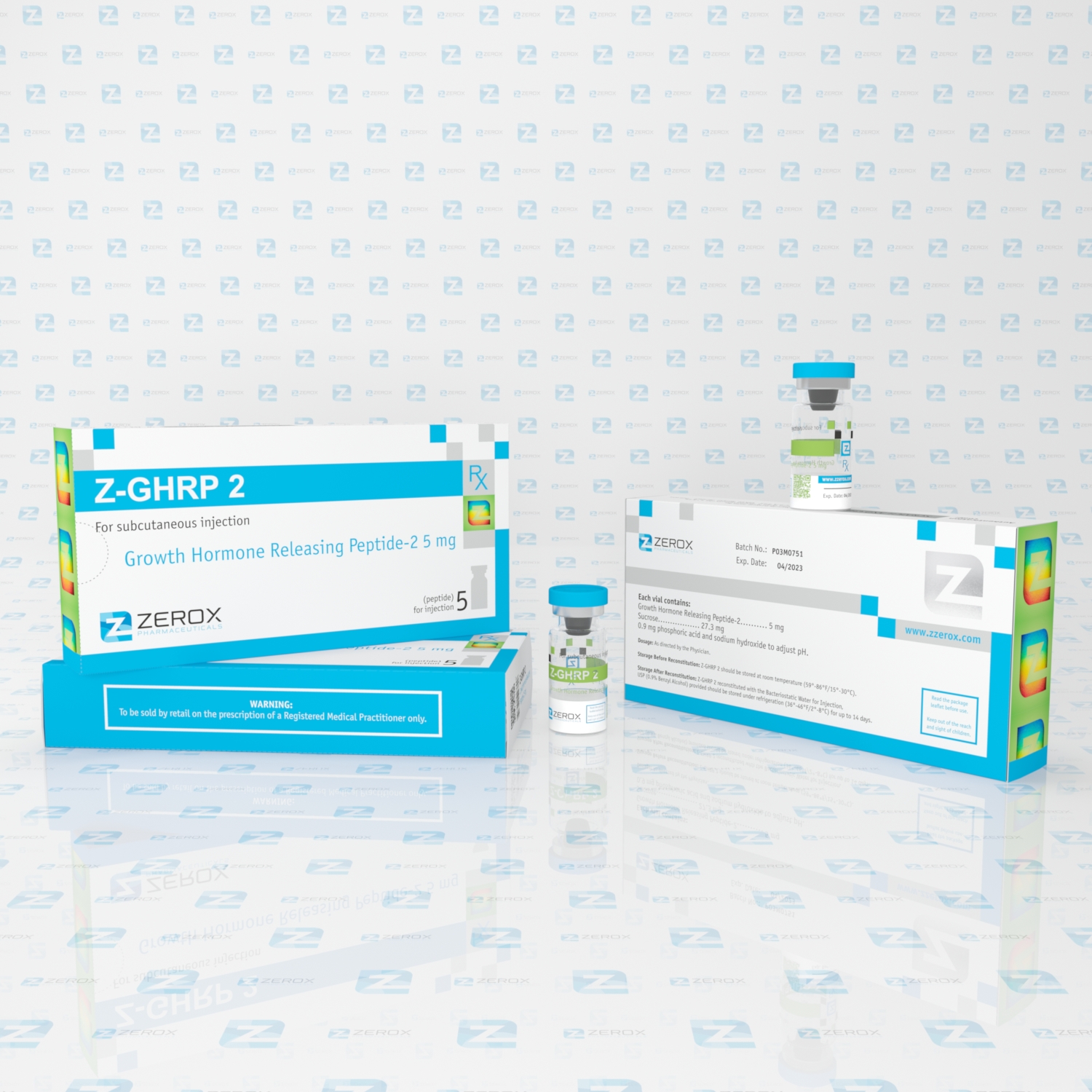 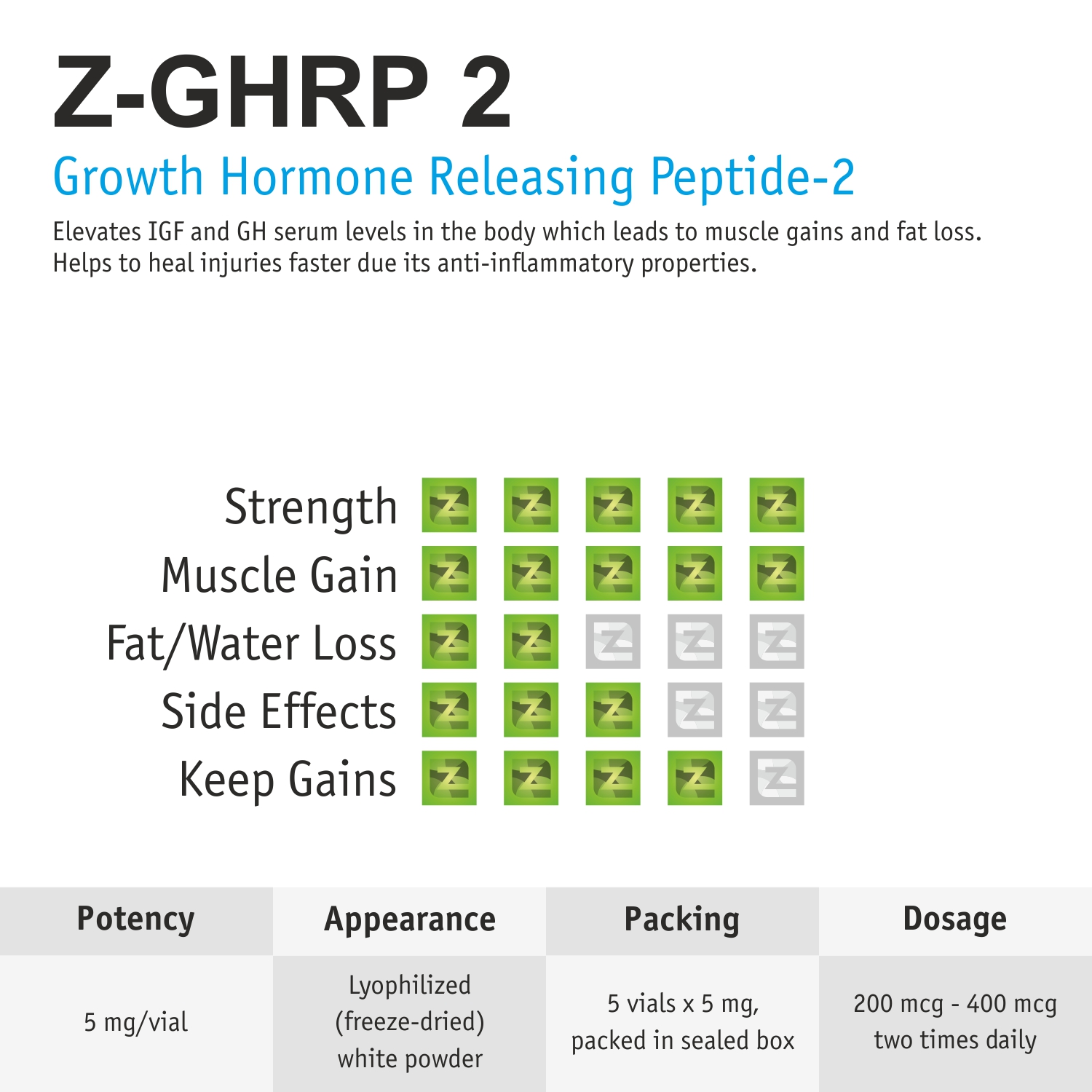 GHRP-2, like its brother GHRP-6, is a hexapeptide that is a pure growth hormone secretagogue. In addition, GHRP-2 is a synthetic agonist of ghrelin. Unlike GHRP-6, this peptide does not bring on the heavy hunger side effects associated with GHRP-6; however, some users will notice slight increases in hunger. Somewhere in between GHRP-6 and Ipamorelin this hexapeptide has the ability to be a serious contender when considering which GHRP to use with your GHRH.

Remember way back when I addressed the amazing ability GHRP-6 on improving the production of the hormone Ghrelin in the stomach (a hormone that controls hunger and GH release)? Well let me tell you about GHRP-2 and why this peptide is one step better than its little brother GHRP-6. Unlike GHRP-6, GHRP-2 does not come with the heavy hunger side effect, but still maintains all the benefits of activating ghrelin. You may be contemplating why is ghrelin so important for a growth hormone releasing peptide? Let’s take a closer look.

Ghrelin is a regulatory GH secretion that is produced inside the stomach and is largely regulated by a person’s nutritional intake. Studies have shown that ghrelin increases during times of fasting and anticipation of meals. This is the main reason why the users of GHRP-6 will experience extreme hunger as the peptide mimics the affects of ghrelin acting as if the stomach is in a state of fasting. GHRP-2 does the same, but chemists were able to dial back the severity of the hunger sides with GHRP-2. This is not to say that GHRP-2 will not increase hunger in most users, as it most definitely will, as you can see represented in the table below:

HOW DOES IT WORK?

The single polypeptide chain composed of six amino acids is a growth hormone releasing peptide. This hexapeptide not only functions to stimulate ghrelin release, but it also works to correct production of low level growth hormone. Simply put, GHRP-2 is perfectly designed with the intention of releasing human growth hormone from the pituitary gland. These mechanisms have been shown to promote lean body gains in lean body individuals. Since GHRP-2 is a ghrelin agonist, it helps to promote the secretion of human growth hormone in a two fold process. For one, it acts to boost growth hormone through amplification of the transduction pathway. In addition, it suppresses the action of somatostatin (a hormone which limits the release of growth hormone). These actions make GHRP-2 a perfect option to increase endogenous growth hormone levels.

Just like the other peptides we have covered so far, GHRP-2 comes as a lyophilized powder. It must be stored in a cool dry place and should be reconstituted using bacteriostatic water or sodium chloride meant for injection. Once the peptide has been reconstituted, GHRP-2 must be kept in a cold storage like the refrigerator until ready for use. GHRP-2 can be taken in high dosages, if needed; however, it is still unclear how effective these high doses are. Normally, GHRP-2 will be used 2-3 times a day at around 100mcg-300mcg per injection. As with other GHRP’s, it’s highly advisable to also use a GHRH in order maximize the effectiveness of the pulse wave combination in accessing the pituitary pathway to release growth hormone.

As I have already stated, the hunger side effects tied to GHRP-2 should be duly noted. Usage of this peptide can also come with elevated levels of cortisol and prolactin, especially if users are dosing in the higher ranges – over 200mcg/injection. Another common side effect is the feeling of lethargy and tiredness upon first using GHRP-2. Water retention, tingling, numbness and decreased insulin sensitivity have also been cataloged as effects of GHRP-2. The most common positive side effect that bodybuilders and athletes will find with GHRP-2 are: decreased body fat, increase lean body mass, improved sleep, increase in IGF-1 production, increase in bone density and increase in cellular repair. While GHRP-2 has good and bad side effects, it should also be taken into consideration that compared to Hexarelin or GHRP-6, GHRP-2 is actually the mildest GHRP next in line to Ipamorelin.

If you are looking for anti-aging properties or for the ability to increase lean body mass gains on cycle/off cycle, or even as a bridge, GHRP-2 will help you on that path. It is a very potent growth hormone releasing peptide. As always, please be advised that while it does come with some side effects, GHRP-2 will not shut down your natural production of growth hormone like exogenous HGH will. With a proper diet and training, users can utilize GHRP-2 along with a GHRH as a tool that is safe and effective for athletes and bodybuilders alike.