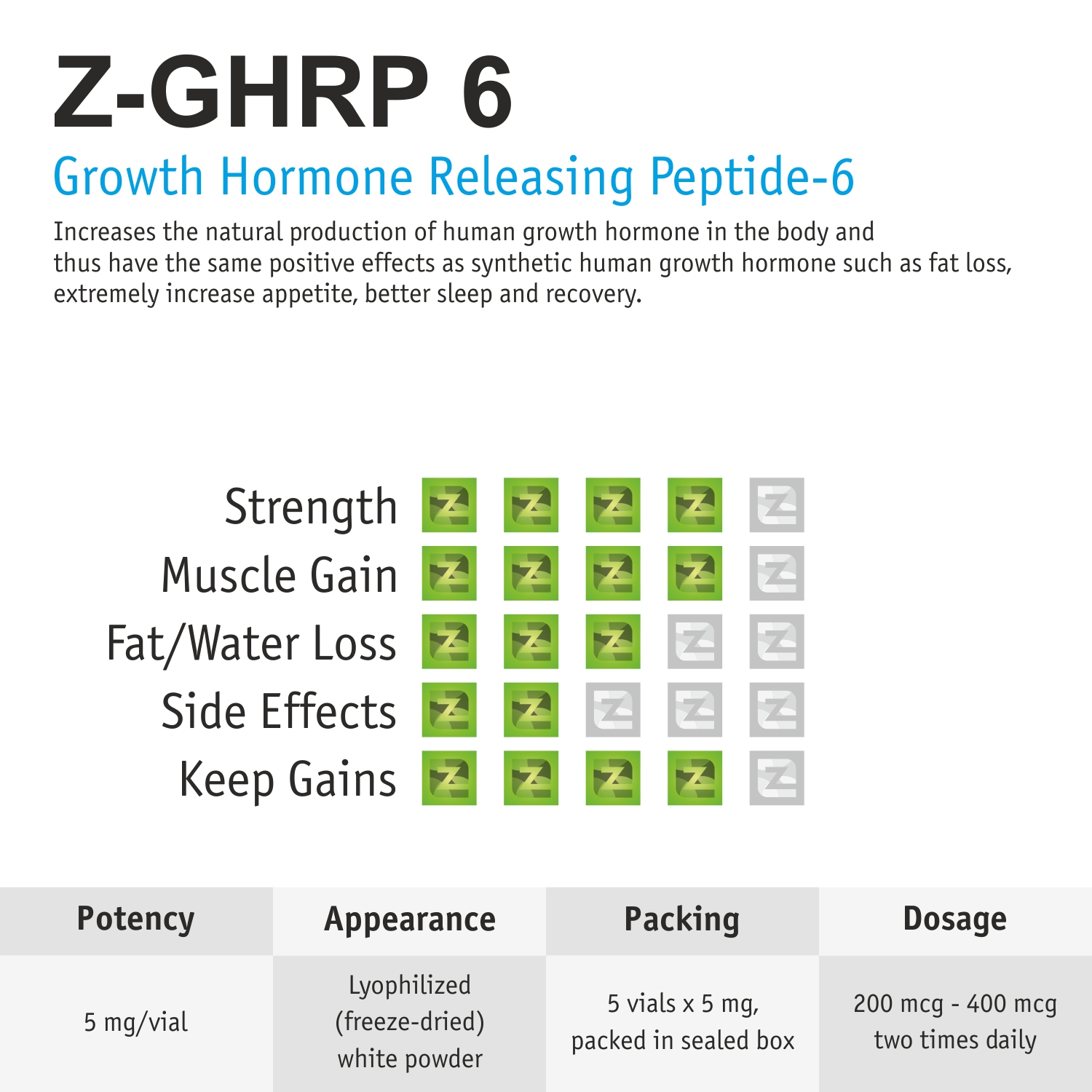 As we get older, we do not stop producing growth hormone (GH), but, in fact, we just do not produce as much as we did when we were growing up. The male body has selected times during the day when the body is ready to release some of the stored growth hormone. Interestingly, the most powerful GH release comes when we sleep (this is why it is important to sleep like a baby). If you are concerned with building muscle, then you know that sleeping and eating are two of the most important factors that you need to keep growing.

Food intake is where GHRP-6 is going to outshine other GHRP peptides. This is mainly due to the fact that GHRP-6 is known to drastically increase hunger, which normally occurs within an hour after injection. The extreme hunger has been linked to the increase of ghrelin within the stomach. Ghrelin is a hormone that is produced by cells in the stomach that are released due to the stomach being empty or if the stomach thinks it is empty. Ghrelin not only aids in stimulating GH release, but it also helps regulate appetite, promote fat loss in muscle tissues and helps in healing damaged tendons. Studies suggest that elevated levels of ghrelin in the stomach have been shown to have a direct link with fast healing of damaged tissues. This is why GHRP-6 may be a better option for healing than the newer modified version GHRP-2. GHRP-2 works the same as GHRP-6 but the extreme hunger side effect is not as severe.

Despite it being third in class as far as strength of GH release, GHRP-6 is still a potent GHRP and can be taken 2-3 times per day. Though there is a slight issue, GHRP-6 has been shown to not be as effective in the presence of elevated blood glucose levels. As a result, I believe the best practice for GHRP-6 dosing is to dose 2 hours after your last meal and 30 minutes before you take in any food, so that no interactions weaken the effect of GHRP-6. Taking this into consideration, GHRP-6 can be taken 2-3 times a day (approximately 3 hours in between injections) for maximum effectiveness with a range of 100mcg-200mcg per dose. Beyond these doses, GHRP-6 was not shown to be any more effective. These saturation points are why you are going to want to break up your administration times throughout the day to allow the receptors to clear.

Injection Schedule – 100mcg upon waking 100mcg post workout 100mcg before bed GHRP-6 is not sex specific, so the same doses also apply to women as they do men. Like other peptides, GHRP-6 comes as a lyophilized (freeze-dried) powder in the amount of 5mg or less. GHRP-6 must be reconstituted with bacteriostatic water and stored in a cool dry place like your refrigerator. Insulin syringes are the best way to administer the hexapeptide often subcutaneously or even intramuscularly.

The expectations from GHRP-6 should fall in line with any other form of HGH, but, of course, to get the very most out of your GHRP-6 it is often synergetic ally paired with a GHRH like CJC-1295 without DAC. Dramatic results may not happen overnight with any peptides; however, improved sleep and hunger stimulation should be felt immediately. With proper diet and training, users will find changes to physique occur within one month of usage. So, to recap, GHRP-6 is a potent growth hormone releasing peptide, but it’s not the most potent of the GHRP family. It has a strong affinity to cause hunger spikes. Used with GHRH, it allows users to release the maximum amount of stored growth hormone in their body. GHRP-6 may aid in some fat loss, but it’s better know to help with sleeping patterns, increase energy and increase in lean body mass. This is why bodybuilders are drawn to using this hexapeptie. Lastly, GHRP-6 is one of the only peptides that is known to actively increase ghrelin in the stomach.